If you want to see my reaction as a comic, check out my cameo on Jordan Jeffries’ blog, where he’s chronicling everything he sees in theaters.

I was pretty excited when I went to see this French coming of age film, since there are few quality lesbian films in the world, and hardly any that I would consider Criterion caliber. Unfortunately, I found BLUE IS THE WARMEST COLOR to be a disappointment. The script seemed to confuse meaningful looks and beautiful close-ups with actual character development; I felt like I sat through the entire three-hour epic without learning anything substantial about either protagonist, other than the fact of their being in love. (This is through no fault of the wonderful actors.) The motifs I found interesting—self discovery, the minefield of high school opinion, the clash of differing backgrounds and professional goals, the insufferable side of the art world—were usually dropped without deeper exploration or even resolution. And what was left felt more like a romanticized fantasy than an actual comment on relationships. Despite my flippant drawing below, one thing I actually quite enjoyed was the controversial and very explicit portrayal of sex. Regardless of its accuracy, it was nice to see lesbian sex shown as rough and passionate, not just gentle and fluffy all the time. 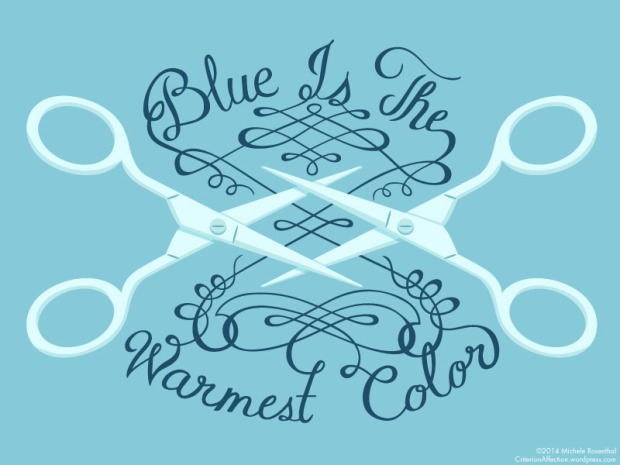